Started in January 2012 and completed in January 2013, the project was awarded to ATC to clear high priority minefields in the Northern provinces. The project was completed successfully early this year.
Started in January 2011, this project was awarded to ATC through an open bidding process which had been announced internationally by the UNOPS. The project was completed successfully in November 2011.
KIA is one of the most important strategic facilities for Afghanistan. The airport was highly contaminated by mines and UXO. At the request of the Ministry of Transportation (MOT) and with funding from the World Bank, the ATC, as the Leading Agency, began clearance of KIA and divided the project into two phases. Phase One began on 1 November 2003 and finished on 30 December 2004 and Phase Two began on 1 January 2005 and clearance operation completed on 20 December 2006.  The teams continued to collect scrap metals and mark safe areas until 31 Dec 06.
The United Nations Mine Action Center for Afghanistan (UNMACA) was responsible for managing and coordinating all mine action activities. Afghan Technical Consultants (ATC) was engaged as the lead agency for the project and was tasked by UNMACA.
During both phases ATC cleared 2,136,415 Sq m of contaminated lands and destroyed 353,279 items of UXO and 3,319 AP Mines.
The Dar-ul-Aman ancient palace was the headquarters of Afghan Defense Ministry in the 80s. This historical and beautiful building located at the outskirts of the capital and surrounded by gardens and hillsides. In 2003, the Afghan Government and the International Security Assistance Forces (ISAF) decided to establish a training facility for the newly-born Afghan National Army (ANA). Historical background and strategic location of Dar-ul-Aman attracted the attention and the place was chosen for the first ANA training facility. But, the area was heavily contaminated by mines and UXO. ATC was assigned by UNMACA to clear the land before any reconstruction efforts to be start. UNOPS provided fund for the project and ATC completed the job in four months time successfully.
Start date: 01 July 2003
End date: 31 October 2003
No. of Tasks completed:        MF 5
BF 14
Area Cleared:                MF: 35,709 Square Meters
BF: 847,990 Square Meters
Devices Destroyed:        AP mines 4
UXO 17,712 items
Fragments: 104,757
Under ATC leadership, this 141-KM long vital international transit road and a total of 460 existing bridges and culverts were successfully and efficiently cleared on due time.
Kabul-Hairatan Power Line mine clearance project: Transmits electricity form Uzbekistan to Kabul City.
Zinda Jan Ammunition Stock with 400 unexploded bombs was described as the most dangerous museum of the world. The UXBs’ were safely destroyed by ATC EOD teams.
The Kabul University and adjacent areas.
Afghan National Army Training Center, Kabul City.
The Power Poles between Kabul City and Surobi Dam
Ammunition depots at the Presidential Palace, Kabul.
Archeological sites in Bamyan Center categorized as the World Heritage Sites.
Mine belts surrounding Jalalabad, Bagram, Bamyan and Kandahar Airports.

Provincial Roads (April 2004 to June 2006)
During the war, Afghanistan lost almost all of its entire main and sub roads, which caused roads to list as high priority clearance areas. The Provincial Road project included Kabul-Gardiz and Jalalabad-Kunar provincial roads and the Pule Alam-Ring Road. ATC as the Lead Agency for both projects successfully supervised all demining work performed by the related agencies.
Jalalabad-Kunar Road is one of very important roads in Afghanistan, which links the frontier province Kunar with Easter region. It also fulfills the requirements of Kunar and Nooristan provinces people such as supplying fruits and other agricultural products to the markets of different cities. Kunar and Noorsitan provinces are very famous for having rich forests. Woods of these forests are exported to other cities and countries through this road.
Kabul-Gardiz Road is also one of advantageous roads of Afghanistan. This road is used to transfer firewood, oil and other merchandize from Pakistan, as well as Paktya, Khost and other provinces to the capital. The people of four provinces; Logar, Paktya, Paktika and Khost are the main beneficiaries of this road. It is estimated that more than 1000 vehicles use this road on a daily basis.
ATC deployed 3 manual teams supported by 2 mechanical units to this project.

Bagram Airfield (Good Neighbor Project)
The area adjacent to Bagram Airfield along the northern and western sections of the perimeter remains heavily contaminated with mines and UXO. The huge mine belts pose a great risk to hundreds of families living in villages close to the mined area.
ATC is the Leading Agency for this project and has deployed 2 Demining Teams and one Hitachi Ground Preparation demining machine to clear the problematic minefields.
The project commenced in October 2006 and continues up to now (July 2007). During the course of operations, ATC teams cleared 110,468 square meters of contaminated agricultural land. As a result, 95 anti tank mines, 2664 antipersonnel mines and 523 items of UXO were discovered and destroyed.

Logar Bomb Dump
In 2003, a huge depot of unexploded aircraft bombs was discovered in Logar province south of Kabul. The bombs posed a great risk to the residents of the nearby villages. Two ATC EOD teams were assigned to work on this bomb dump. The work started on 13 December 2003 and lasted 10 days. During the operational period the two teams destroyed a number of 492 live and dangerous air dropped bombs.
The PHOTAB and ODAB type bombs stockpiled in the depot were at a range between 80 to 500 KG. Totally, they carried 39,270 Kg Explosives.
The area is used, after the clearance, by 6000 people.
Others Important Sites Cleared by ATC:
In addition, ATC has cleared other important places that have great socio-economic impact on Afghans’ lives. Examples of demining tasks that are completed by ATC teams can be summarized as:
Demining of Kabul University and adjacent areas, BAC operations of Embassy of Japan in Kabul, Kush Haal Khan High school, the power poles between Kabul City and Sorobi Dam via Lataband bypass road, Kabul TV hill, Noman High school in Chrikar City of Parwan Province, Gulbahar textile factory of Kapisa province,  and Different wards of Kabul, Jalalabad, Hirat, Mazar and Charikar Cities including hospitals, residential/commercial areas, gardens, roads, canals and many other high priority tasks. 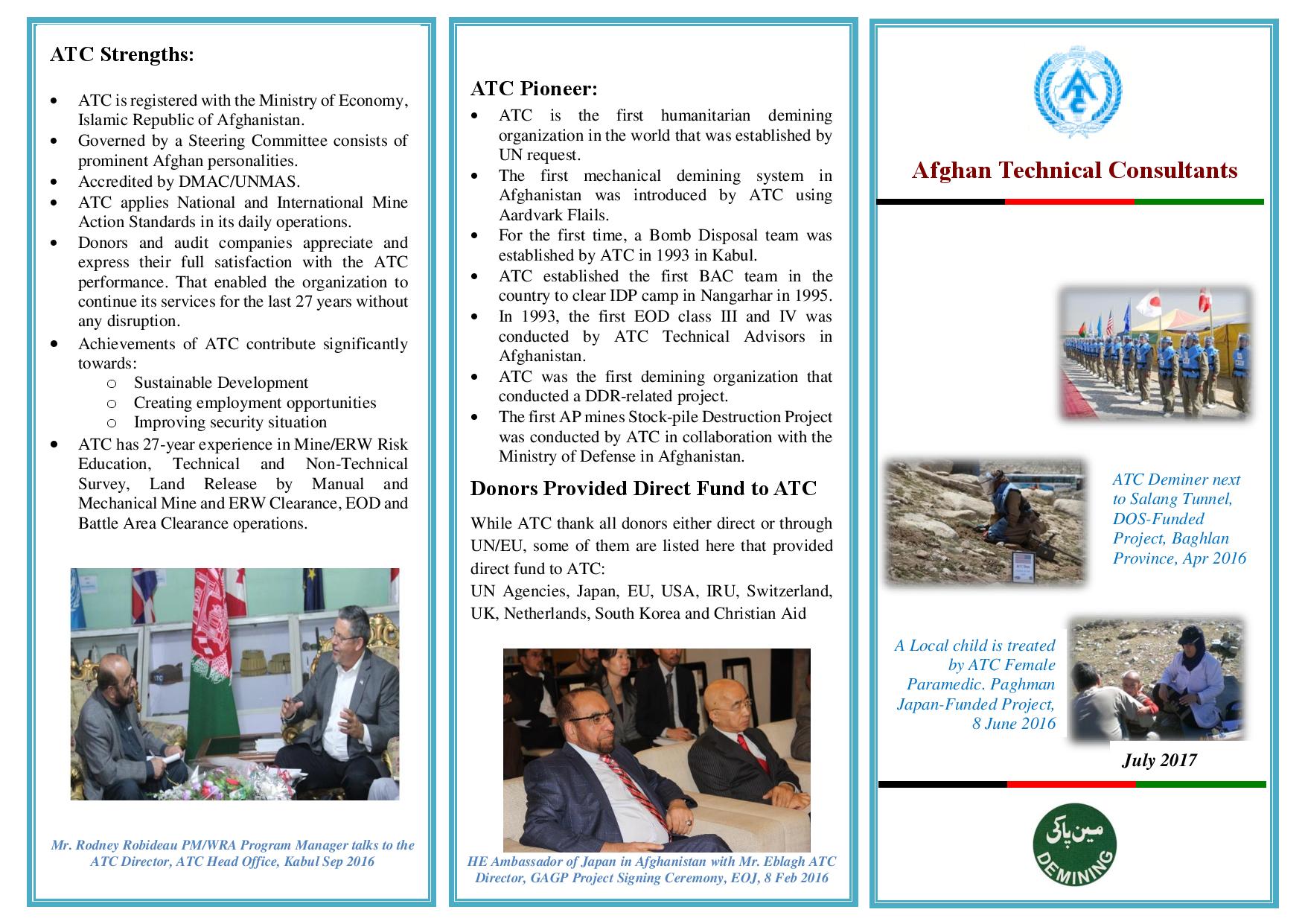